History of the Shih Tzu

The Brachycephalic condition in dogs came about as a mutation during the Mesolithic age, ten thousand years ago, soon after the early stages of the domestication of animals.

Early ancestors of the Shih Tzu originated in middle Asia, the area which encompasses Northern Iraq.

Small shock-headed dogs were received by China from Turfan (a vast region of central Asia in habited by Turkish-speaking people in the A.D. 624 time period (T’ang Dynasty A.D. 618 – 907)).

The “Ha Pa” (Chinese dog of Turkish origin) has been a constituent of Chinese culture since ancient times until the mid-seventeenth century. Also referred to as the “Fu Lin” dog (Fu Lin was on the East-West trade route in the Byzantine Empire). Few dogs of this type had spread as far as Lhasa, Tibet. 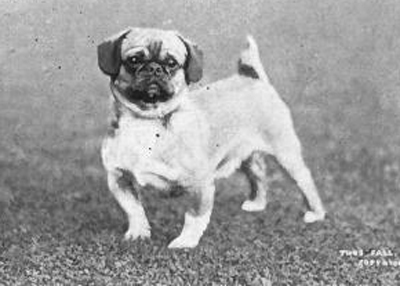 Whether such dogs existed in China before the arrival of those from Fu Lin, or whether one was the ancestor of the other has never been resolved.

The “Ha Pa” is the common ancestor of the Tibetan Spaniel, Lhasa Apso, Pekingese, Shih Tzu, and Pug.

Buddhism, the Lion and the Lion Dog

The lion was associated with Buddhism as early as 260 B.C. A symbol of royalty, strength and protection, it is a used as symbol for the protection of Buddha’s law.

Buddha’s teachings are referred to as the “Lion’s Roar”. The lion is seen as a protector of the dharma, or Buddhist law, and a talisman to ward off evil.

The Lion Dogs of both Tibet and China are integrally tied to Buddhism, being considered a living, symbolic representation of the Lion that had become so venerated in the Buddhist religion.

The “Lion Dog” concept took hold in China about 700 years after the time of Christ, with the arrival of temple dogs, along with Buddhism from Tibet

Chinese variations plausibly flourished for 40 years prior to the visit of the Dalai Lama to Peking in 1643.

The first use of the word Shih Tzu (“Lion”) in Chinese literature was in 1373.

Bearded Lion Dogs (Apso Seng Kyi) were often given as gifts by the Dalai Lama and other Tibetan dignitaries. In turn, the dogs of China were also given as gifts to the Lamas and other dignitaries in Tibet. The exchange of these dogs between Tibet and China over many centuries most certainly had an effect on the development of Lion Dog type in both countries. 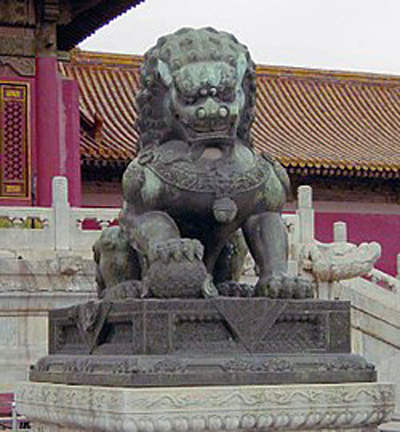 Thus by reciprocal evolution such dogs were bred concurrently in China and Tibet. For noble grandeur in China and spiritual succor in Tibet.

The last time the Dalai Lama visited Peking was in 1908 where several more dogs were presented to the Empress Dowager.

Palace eunuchs were extensively involved in the breeding of small dogs within the Forbidden City since 1700. The breeding was generally capricious without particular direction. This was the case prior to the advent of the Empress Dowager where venturesome breeding was no longer condoned.

The Empress Dowager set the criterion, and eunuchs vied with one another to come up with the prototype she set – the object being to gain her favour. By the early 1860’s she was well
into the breeding of the dogs. Her interests centered on a species somewhat different that which graced the imperial household for centuries.

Because there was no accepted Standard as a precedent, the critical evaluation of the Empress Dowager became their frame of reference.

Whether it had begun with her intent to develop a species different from that in existence, or it just worked out that way is a matter of conjecture. The changes were so gradual that few were aware of the shifts of emphasis.

Depending on point of view she made or saved the Shih Tzu. The “prototype” for the Shih Tzu as we know it today began with the Empress. Her successor Pu Yi “The Last Emperor” had a distain for dogs but ultimately Communism sealed the fate of all.

The Empress did not care for the small sleeve dog and deplored the breeding of these freaks... Her decisions were based on health, temperament, conformation and markings... Harmony of anatomy and vigour were sought in her early breeding programme as was the unique oriental expression... 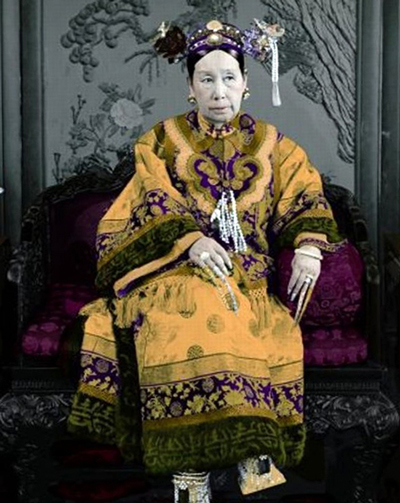 Chinese Empress Dowager and regent who was the de facto supreme ruler of China in the late Qing Dynasty for 47 years,
from 1861 until her death in 1908. 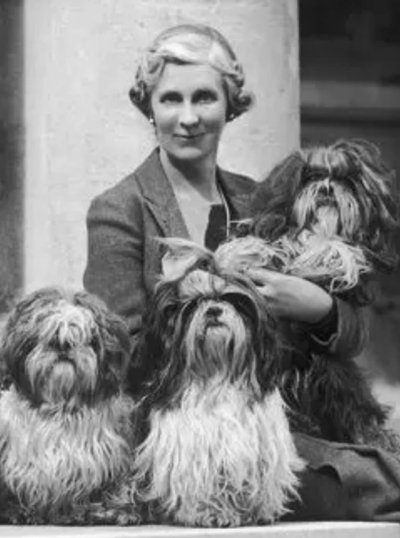 Several dogs were brought to Europe during the pre-war years, to Norway as well as England. They were brought to British shores in 1928 by a very remarkable woman, Lady Brownrigg (Taishan), the much travelled wife of the Quarter Master General to the North China Command. She was about thirty years old and very fond of animals and birds.

When she and her husband returned to England they bought with them 2 Shih Tzu, a dog called “Hibou” and a bitch called “Shu-Ssa” both black and white and described as small. “Shu-ssa” was said to have a thick but smooth coat which stuck out on her head and face so that she looked like a baby owl or alternatively like a chrysanthemum, just as Shih Tzu resemble today – especially puppies.

“Shu-Ssa” was mated to “Hibou” and to a dog called “Lung-Fu-Ssa” which a Mrs Hutchins brought back to Ireland in 1933. It was from the off-spring of “Hibou”, “Shu-Ssa” and “Lung-Fu-Ssa” that all the Taishan Shih Tzu were descended, as are so many of our present day dogs.

The weight of all these 3 dogs were known to be within the range of 12-15 lbs which she considered to be the ideal weight. There must have been great excitement when “Shu-Ssa”, “Hibou” and “Lung-Fu-Ssa” were exhibited at WELKS for the first time in 1933.  “Shu-Ssa” was exhibited at Crufts in 1936 where she went BOB. The breed in the UK then went from strength to strength with over 100 registered in 1939. They were granted their own register in 1940.

The first Shih Tzu to gain their title was in 1947 Ch. Ta Chi of Taishan. 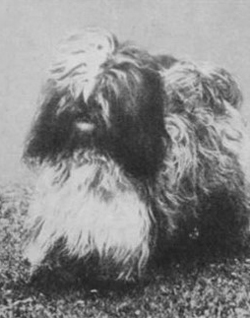 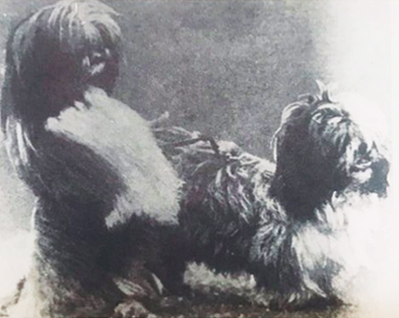 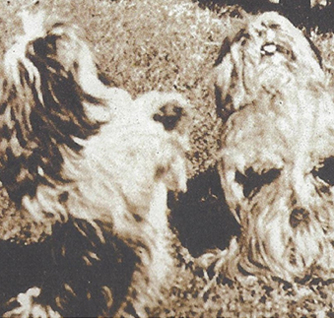 All present day Shih Tzu stem from 13 known bloodlines (exported to Ireland and Great Britain). 11 were Chinese imports, 1 Canadian import from Chinese imported parents and the 13th was a Pekingese (which later led to the infamous 1952 Peke-Cross). “Leidza” was the only known Palace born Shih Tzu to reach the West.

Later on a breeder of Pekinese, Freda Evans (Elfann) acquired two Shih Tzu. She decided that what the breed needed was the introduction of the Pekingese blood and so it was that she carried out the famous (or infamous) “Peke cross” in October 1952.

The fact that the cross had been carried out by a newcomer to the breed and without consultation with the Breed Club seemed to have caused a great deal of bad feeling, especially as it was not generally agreed that the faults Miss Evans was seeking to correct were particularly bad in the breed as it then stood. These included being too big and leggy, having too much length of nose and bad pigment.

Four generations down the line The Kennel Club (UK) accepted these as pure bred Shih Tzu.

When we look at the flow of genes below we can see that the introduction of Peke blood in 1952 was hardly controversial as the ancestry of the Pekingese was common to the precursors involved in the development of the Shih Tzu breed through most ancient times.

Today there is not a Shih Tzu anywhere in the world that is free of the “Peke-Cross” far back in their pedigrees. 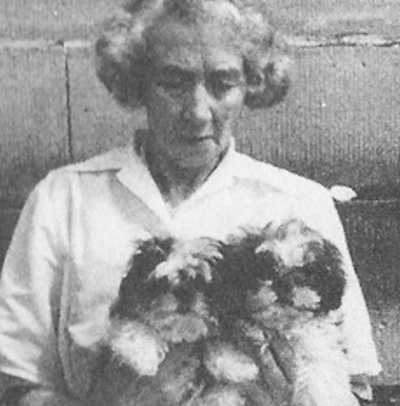 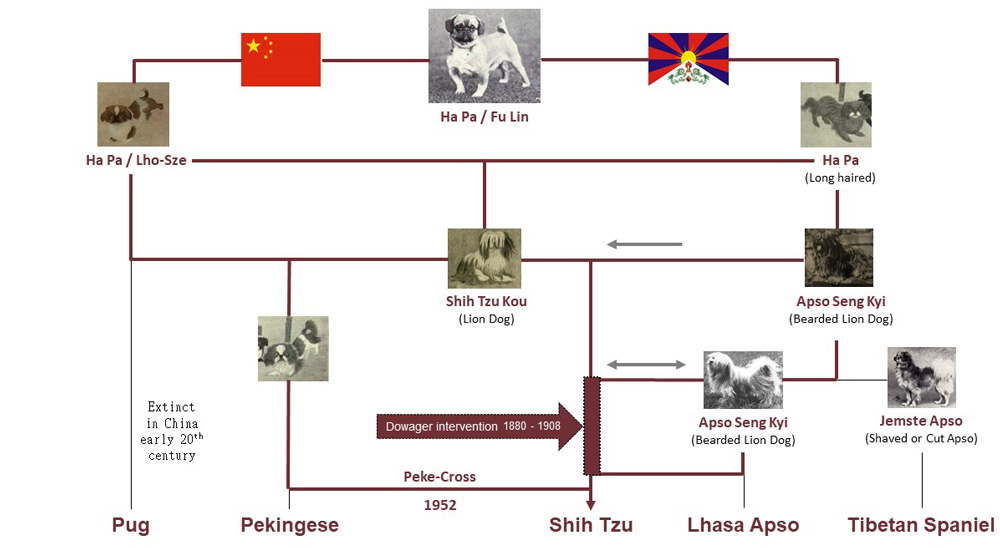 Gay Widdrington (Lhakang) bought her first Shih Tzu from Lady Brownrigg shortly after sighting them. This was a black and white bitch puppy called Mee-Na of Taishan. She was only bought as a companion, but this puppy set her off on a course that would lead her to become one of the best known figures in the breed. Gay’s outstanding contribution to the Shih Tzu development has been through her breeding programme, never fearing to introduce new bloodlines to widen the gene pool but always cleverly breeding back into her own line thereafter, thus preserving the best from the very earliest strain that came to England.

In the post war years Gay helped with the development of the Shih Tzu Club (UK). Lhakang remains one of the longest established kennel of Shih Tzu to date. The 1950s and 60s were something of a golden age for the development of Shih Tzu in the UK. Although Lady Brownrigg was no longer so active in the breed, both Gay Widdrington (Lhakang) and Freda Evans continued so there was continuity from the early days. Amongst the English kennels that entered the breed during this period, three in particular have been important, not only because of the quality of the dogs they bred and owned but also because of the influence of their stock overseas, and their dedication to the breed right up to recent times.

These are the Antarctica kennel of Betty and Ken Rawlings, Jeanne and Arnold Leadbitter’s Greenmoss and Audrey Dadds’ Snaefell. All these breeders have earned their place in the history of the breed both by the length of time over which they played a part, and by their significant contribution to the welfare of the Shih Tzu through their support for the breed clubs.

The Antarctica kennel of Ken and Betty Rawlings has been one of the most successful in the history of the breed in Britain exhibiting winning dogs for over thirty years, making up their first champion in 1963 and their last in 1996.

Jeanne and Arnold Leadbitter have not only had great success in the show ring themselves, but have contributed to the success of kennels in other countries where the Greenmoss Shih Tzu have been exported. Their first Champion was made up in 1964 and their last in 1992.

The name of Audrey Dadds and her Snaefell prefix is known to Shih Tzu enthusiasts across the world not only for the quality of her dogs, but also for her prolific writing of the breed.

Together with Taishan, Lhakang and Elfann, the kennel names of Antarctica, Greenmoss and Snaefell will be found behind many of the Shih Tzu across the world today.

From about 1970 onwards the most potent influence on the Shih Tzu was the effect of the growing popularity of the breed itself. The increase in numbers and the popularity also led to more and more clubs being formed throughout the world to promote the well-being of the Shih Tzu.

In the show ring the increased popularity of the breed led to much stiffer competition and attracted skilled exhibitors from other breeds, who have brought new standards of presentation with them. It is probably in the area of coat preparation and care that the greatest changes have taken place over the last twenty years.

Entries remained high throughout the 80’s and 90’s but since then a slow decrease in number has been witnessed throughout many parts of the world. In those Countries where the presentation is more ‘natural’ the numbers still remain strong.

The largest challenge the breed will face in the years to come is simply to ensure the future of this unique breed for the generations to come.